I am pleased to announce a new high school tournament available for mirrors for the 2015-2016 academic year:

CALI is a collaboration between several California-based writers: Ankit Aggarwal, Aseem Keyal, and Bruce Lou of UC Berkeley, Corry Wang and Kevin Wang of formerly Arcadia and now Amherst College, Jason Cheng and Parikshit Chauhan of UC San Diego, Hidehiro Anto and Charlie Mann of UC Los Angeles, Kion You of Rancho Bernardo and Eddie Kim. Eric Mukherjee of University of Pennsylvania will also be overseeing the set during production. This team includes several experienced writers and editors who are eager to provide a quality set of questions for the enjoyment of teams all across the nation. The bulk of profits generated from mirrors of this set will go towards funding California's 2016 All-Star NASAT team.

As of the writing of this post (June 3, 2015), the set is 41% completed, with roughly 30% of those questions already edited. Our goal is to have this set completed, edited, packetized, and ready for play by September 13th, 2015. CALI will be available for use from the weekend of September 20th, 2015 to the weekend of May 21st, 2016. We are seeking mirror sites from every region in the country, and possibly overseas if the demand exists.

If you are interested in mirroring or using CALI, please email me at [email protected] and we'll work out the details. We will attempt to strike a balance between maximizing the number of teams that our tournament will reach and providing a fair national distribution of mirrors. Should there be multiple bids in one region, we will show a preference for the hosts who are most willing and able to achieve as many of these criteria as possible:
The mirror fee is $10 per team in attendance.

Tossups will be five to six lines long (as close to 650 characters as possible, or 225 characters longer than the standard NAQT IS question). Tossups will be powermarked, should hosts wish to run a tournament with powers. Bonuses will be similarly length-controlled.

Electronic copies of this set may only be distributed by the editors of this set (or by tournament directors to their staffers). Requests for electronic copies of the set after the tournament is over should be directed to [email protected]. Question content is not to be discussed publicly until after the set has been posted online for public access (we will set up a private discussion forum for this set, available for access after you or your team has attended a mirror).

Our target difficulty is exactly regular high school difficulty. To accomplish this, we will be implementing a series of measures:
We hope that through this process, we will provide an engaging experience for all high school players, experienced and inexperienced alike. CALI should be both accessible to lower-skill teams but still interesting for teams capable of making waves at nationals.

Subject distribution is as follows (22 tossups and 21 bonus questions per round. Tiebreaker tossups 21 and 22 and tiebreaker bonus 21 will always be Literature, History, and Science, although not necessarily in that order) :

We are excited to provide a high-quality experience to all parties interested in quiz bowl, and hope you will help us make CALI a success!
Last edited by Jason Cheng on Thu Jun 18, 2015 1:16 am, edited 4 times in total.
Jason Cheng
Arcadia High School 2013
UCSD 2017
PACE
http://www.socalquizbowl.org
Top

We are seeking mirror sites all across the country! If you feel that your geographic region is not represented by the above list and wish to host, please contact me at [email protected]ail.com.
Last edited by Jason Cheng on Tue Feb 02, 2016 9:51 pm, edited 26 times in total.
Jason Cheng
Arcadia High School 2013
UCSD 2017
PACE
http://www.socalquizbowl.org
Top

UPDATE: I'm happy to announce that, as of today, CALI is at 50% writing completion! And out of those questions, 40% have already been edited. HYPE HYPE HYPE :D
Corry Wang
Arcadia High School 2013
Amherst College 2017
NAQT Writer and Subject Editor
Top

First, we have decided to readjust our set's format in order to provide 15 packets, rather than the original 14. To do this, we moved some tiebreaker questions around and added one more question to every category that is not literature, history, or science. As a result, each round now contains 22 tossups and 21 bonuses each, rather than the original 23 of each (in other words, 2 tiebreakers tossups and a tiebreaker bonus instead of 3 tiebreaker tossups and 3 tiebreaker bonuses). The overall mirror fee remains the same: $10 per team in attendance. In doing this, we hope to give you your money's worth by providing one extra round of questions in order to facilitate scheduling and possible head-to-head tiebreaker matches, while still hopefully providing enough questions per round to resolve a tied score or serve as replacements in the event of an accident.

Second, Eric Mukherjee of University of Pennsylvania has joined our team and has been helping us while we thoroughly edit the set in order to deliver the best possible end product by our ship date in September.

Third, as an update to Corry's post, we are now at 60% writing completion!

If there is yet to be a mirror claimed for your region (so far, we have 6, plus several local mirrors in Missouri; the formal list of our mirrors can be found in the second post of this thread) and you have an interest in hosting, please contact us. We are excited to be producing this set, and we hope to provide a successful and enjoyable experience to as many high school teams as possible.
Jason Cheng
Arcadia High School 2013
UCSD 2017
PACE
http://www.socalquizbowl.org
Top

More Updates! The history and geography in this set are now 100% written, as well as more than half edited.

As a side note, I would like to take this opportunity to clarify one of the set's writing principles: Expect answer lines to be repeated. While we will try our best to make sure that no specific answers lines are ever repeated within the same question category (e.g. you won't see two Greek myth questions on Heracles), players can still expect specific answer lines to be repeated across different categories (e.g. a history tossup and a social science tossup both on "schools").
Corry Wang
Arcadia High School 2013
Amherst College 2017
NAQT Writer and Subject Editor
Top

To expand on Corry's statement, this isn't a brand new innovative idea - most sets, including NSC or NASAT, have some very broad answer lines (e.g. "France" or "dogs") repeated across multiple subjects. We're just putting this out there so there aren't any nasty surprises. Of course, there will be no repeats inside any given subject, nor will there be clue repeats across the set.
Eddie Kim
he/him/his
local lad, no major affiliations
Top

MORE UPDATES: This set is now 70% written (with a significant portion of that also having been edited).

We are now at 80% writing completion.

Good Hope High School (Cullman, AL) would like to consider running a mirror of this set on October 17th. Could you PM or email me more details about doing so?

Just as a quick update, we've been at 100% writing completion for quite some time now! 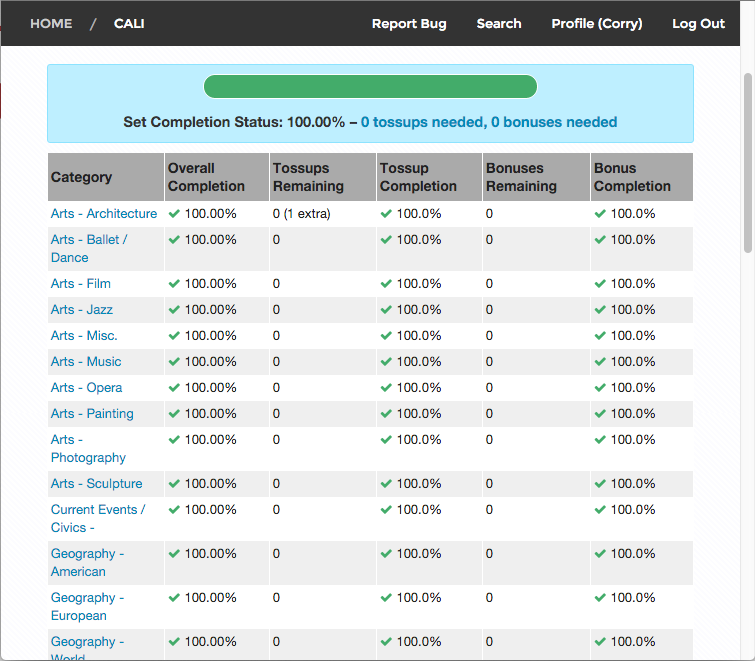 CALI was mirrored at Kenyon College in Ohio yesterday, and from what I've heard, was well-received!

The private discussion forum is now up and running! To join, click on "User Control Panel" and then go over to "usergroups" and click "apply to join" for "2015 CALI Discussion". We'll approve you once we've confirmed that you've played or seen the questions already.
Jason Cheng
Arcadia High School 2013
UCSD 2017
PACE
http://www.socalquizbowl.org
Top