Play Quiz Bowl LLC is excited to announce the inevitable existence of ACRONYM X, an all pop-culture tournament for high school students that will be available beginning in late February of next year. While the production will again be headed by me, this year will not be co-produced by Robbinsdale Armstrong High School. The set will be written by myself, Daniel Vopava and William Golden. 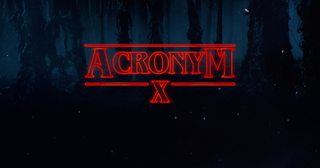 ACRONYM X will consist of 11 packets and have a more standard, "CO Trash-ian" distribution than previous sets:

Difficulty level will probably be about the same as last year. As with previous ACRONYMs, there'll be a reasonable focus on "recent trash," though there may be a bit less of that focus this time around. As always, accessibility is a top priority. 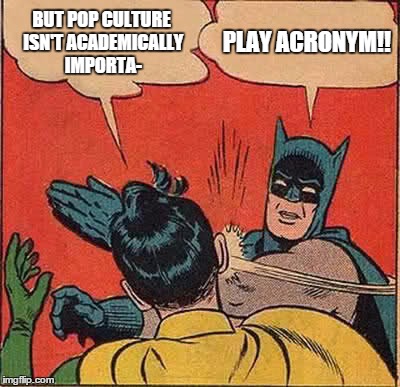 There will be (at least) two open mirrors on the weekend of February 25, 2017 - one in Minneapolis (details coming soon), and another in Michigan as part of Auroni's (This) Tournament is a Crime main site.

Another mirror will be held at the University of Toronto on March 11. Details of that mirror are here.

The flagship tournament for high schoolers will be on March 4 at a Burnsville High School. The field for this has filled, but if you wish to register for the waiting list, just email me.

If you want to host a mirror, let me know here or at "erikhasemail" at Google's fancy electronic mail service.
Erik Nelson
Minnesota
NAQT, President of Play Quiz Bowl, Director of the Bounceback Foundation
Top

Will you be holding an ACRONYM mirror at HSNCT and/or NSC again this year, or will your plans be limited to the sites already listed?
Charles Hang
Francis Howell Central '09
St. Charles Community College '14
Washington University in St. Louis '19 (President, 2017-19)

There will be a bunch of other mirrors - stay tuned for announcements on at least one big one soon.
Erik Nelson
Minnesota
NAQT, President of Play Quiz Bowl, Director of the Bounceback Foundation
Top