Elaborate on the merits of specific tournaments or have general theoretical discussion here.
Post Reply
1 post • Page 1 of 1

The 2019 ACF Fall Experience Survey was in 5 parts: Background, Logistics, Tournament Experience, Your Team, and Other Tournaments. Participants got to choose what order they took the survey in and how many sections to fill out, so the number of responses per section will vary (and in a couple of cases, it introduces NA values because they didn't fill out a section). I sent out a survey to every team contact for ACF Fall, with the instruction to pass it along to their teammates. The survey was also posted on ACF social media, a quizbowl Facebook group, and the Discord. If you filled it out, thank you!

Per the text of the survey, we will not be making the full results of the survey public outside of ACF. This is what the respondents expected when they took the survey, so unfortunately that can't change now.

We had 96 respondents to the survey of the time of writing. This post will focus on the 68 respondents who said they were collegiate players.

This looks pretty good on mobile; depending on your computer screen the graphs might be a bit large.

I wrote the survey myself, but stole some questions from a forgotten survey draft by Victor Prieto. Thank you to him, and to Marianna Zhang for some question and response ideas.

Who were our collegiate survey respondents? 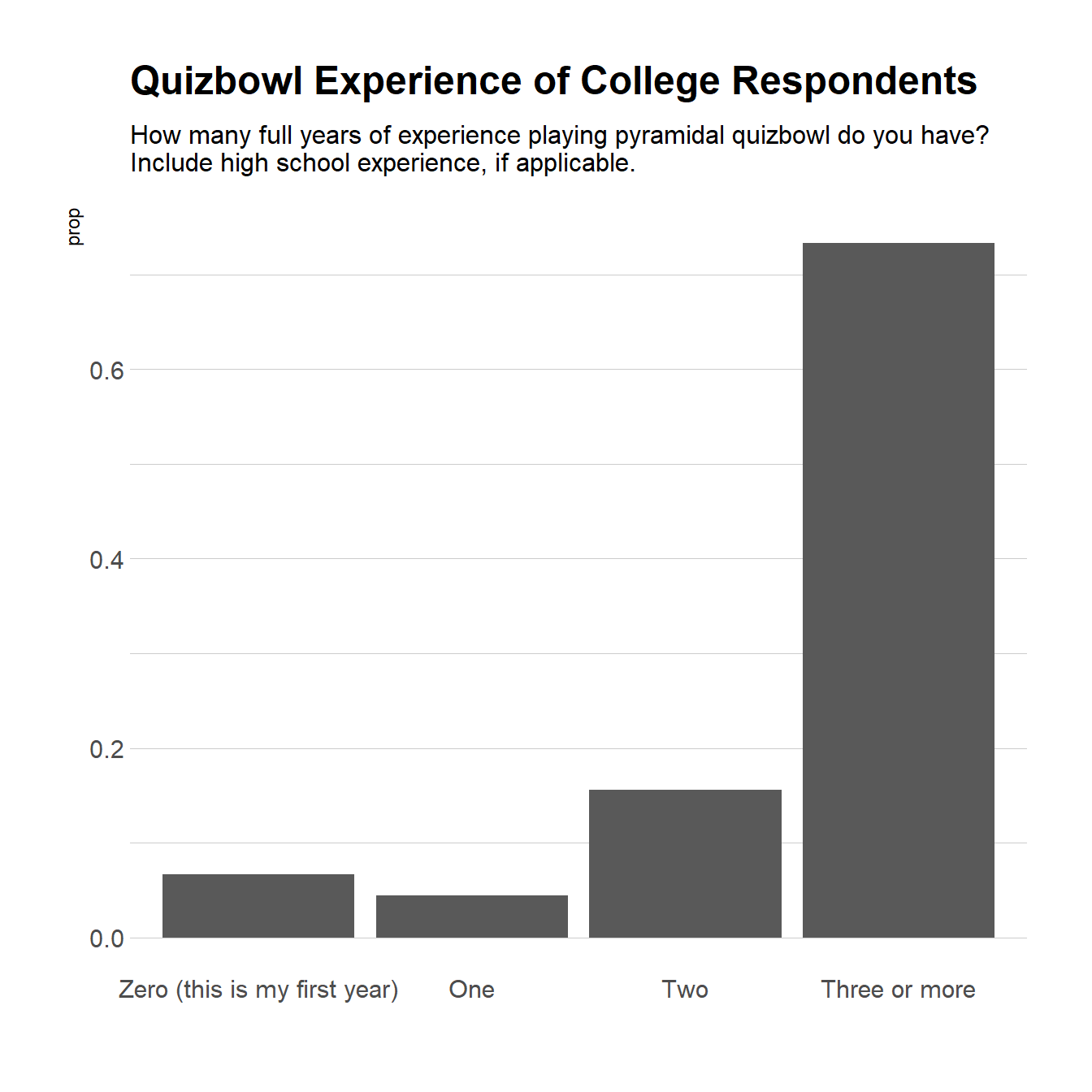 About three-quarters of our respondents had three or more years of quizbowl experience, and about a quarter did not (n=45). 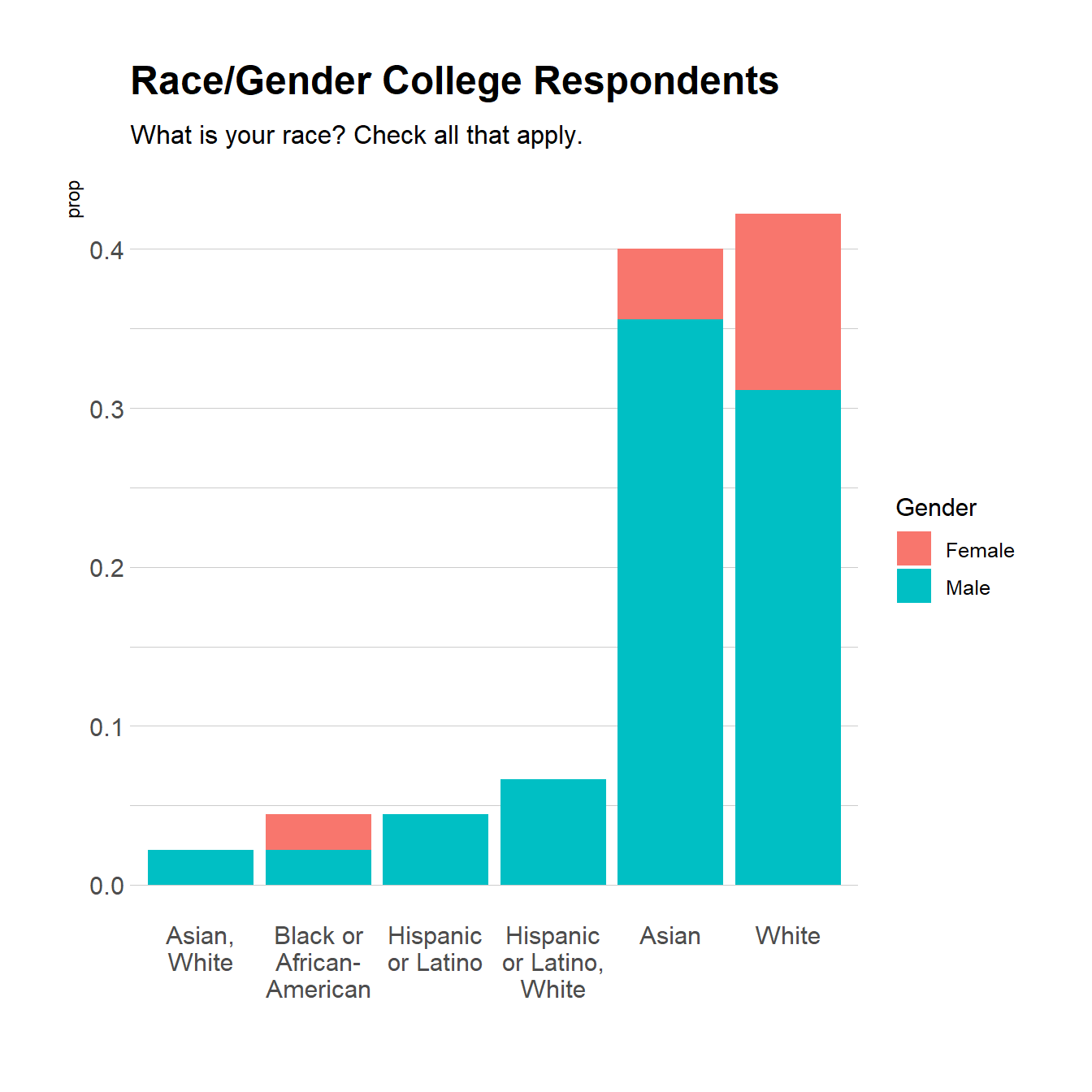 Respondents were allowed to write in their own gender, although none did. They were also allowed to check multiple race categories. The overwhelming majority of respondents were Asian or White. No respondents checked "Native American, First Nations, Indigenous, or Alaska Native" or "Native Hawaiian or Pacific Islander" (n=45). 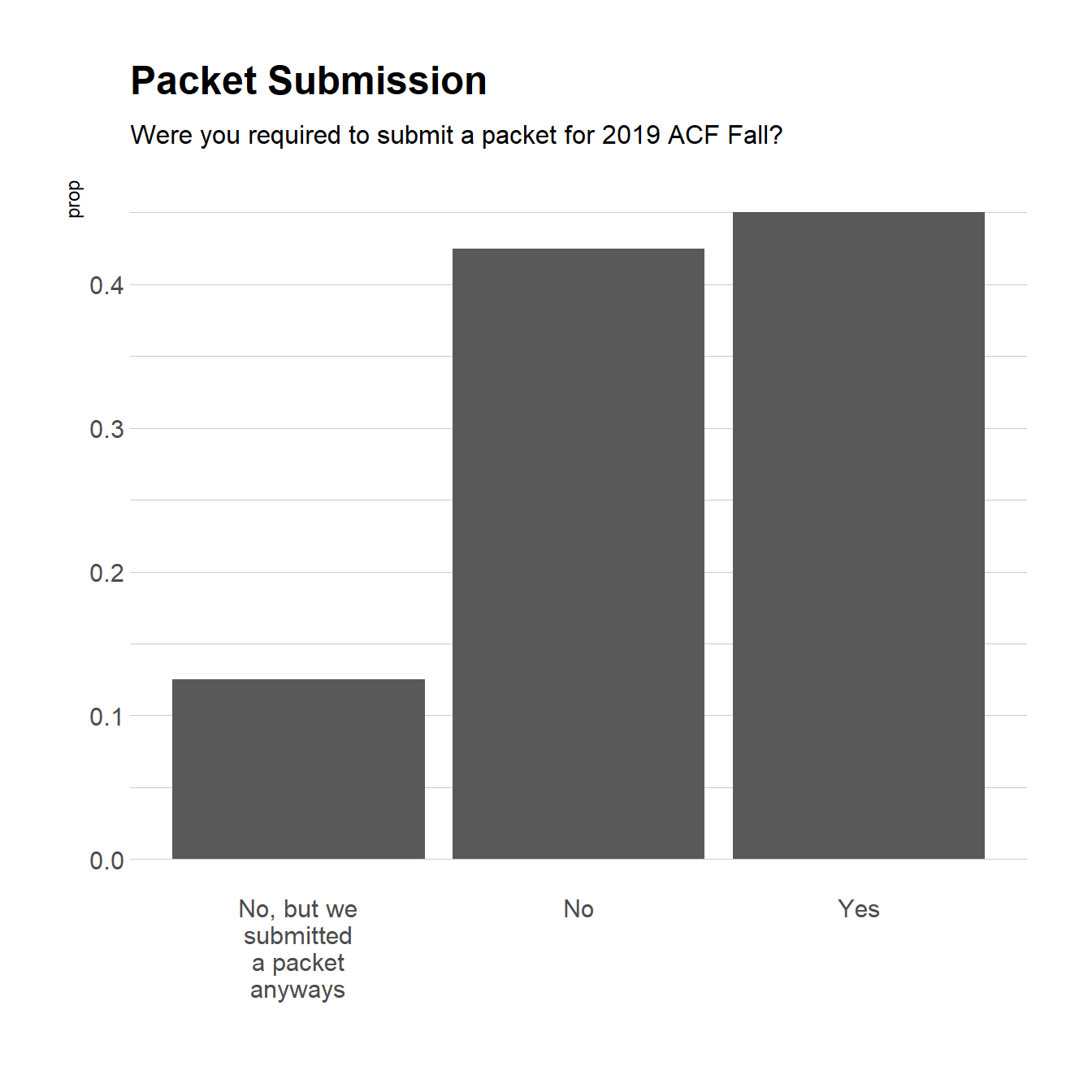 A little more than half of the respondents submitted a packet for ACF Fall (n=40). 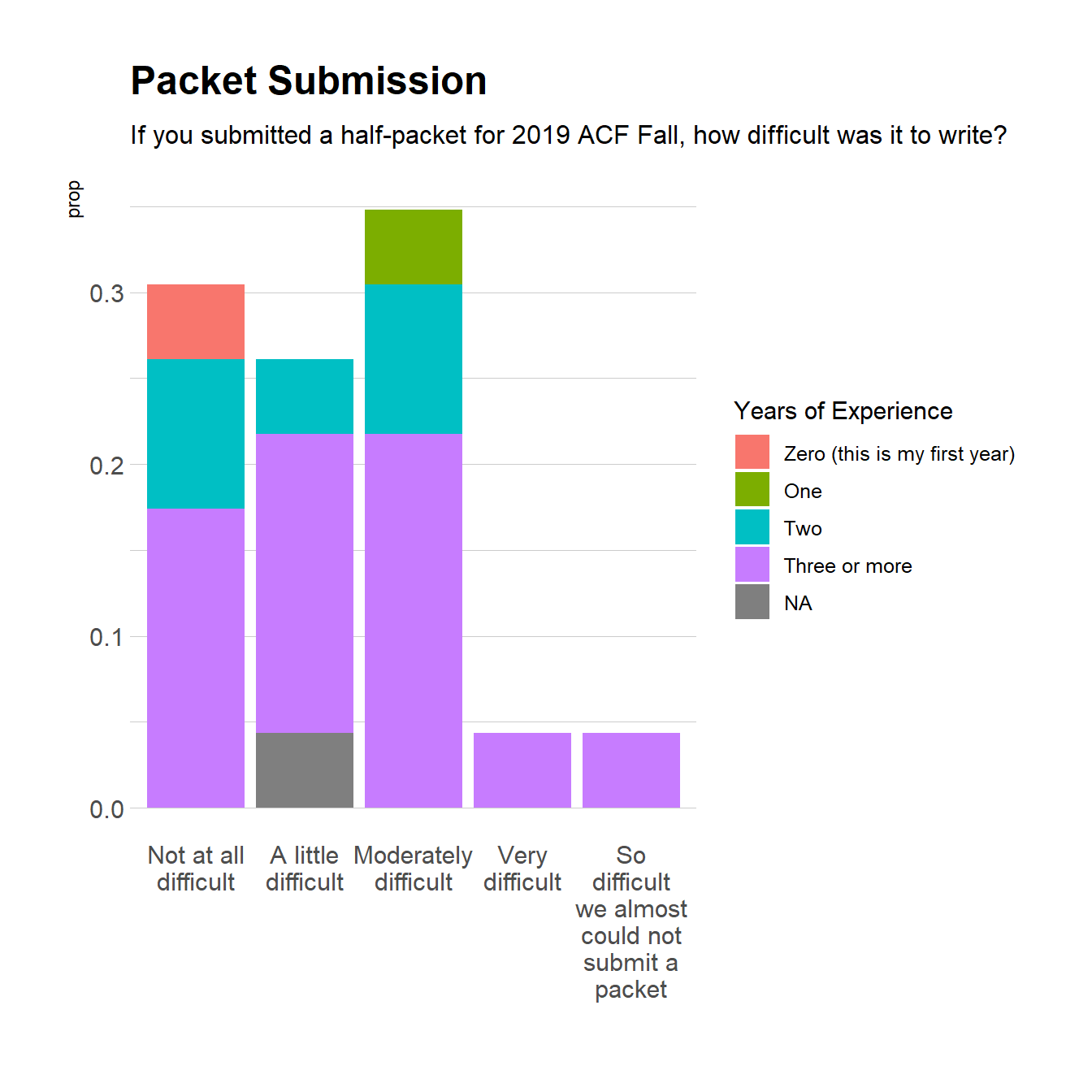 We had 24 respondents for this question. Of the respondents who said they submitted a packet for ACF Fall, most said that it was not at all, a little, or moderately difficult to write. Surprisingly, the people who seemed to find packet submission most difficult (one respondent for each of "very difficult" and "so difficult we almost could not submit a packet") had the most experience in quizbowl. 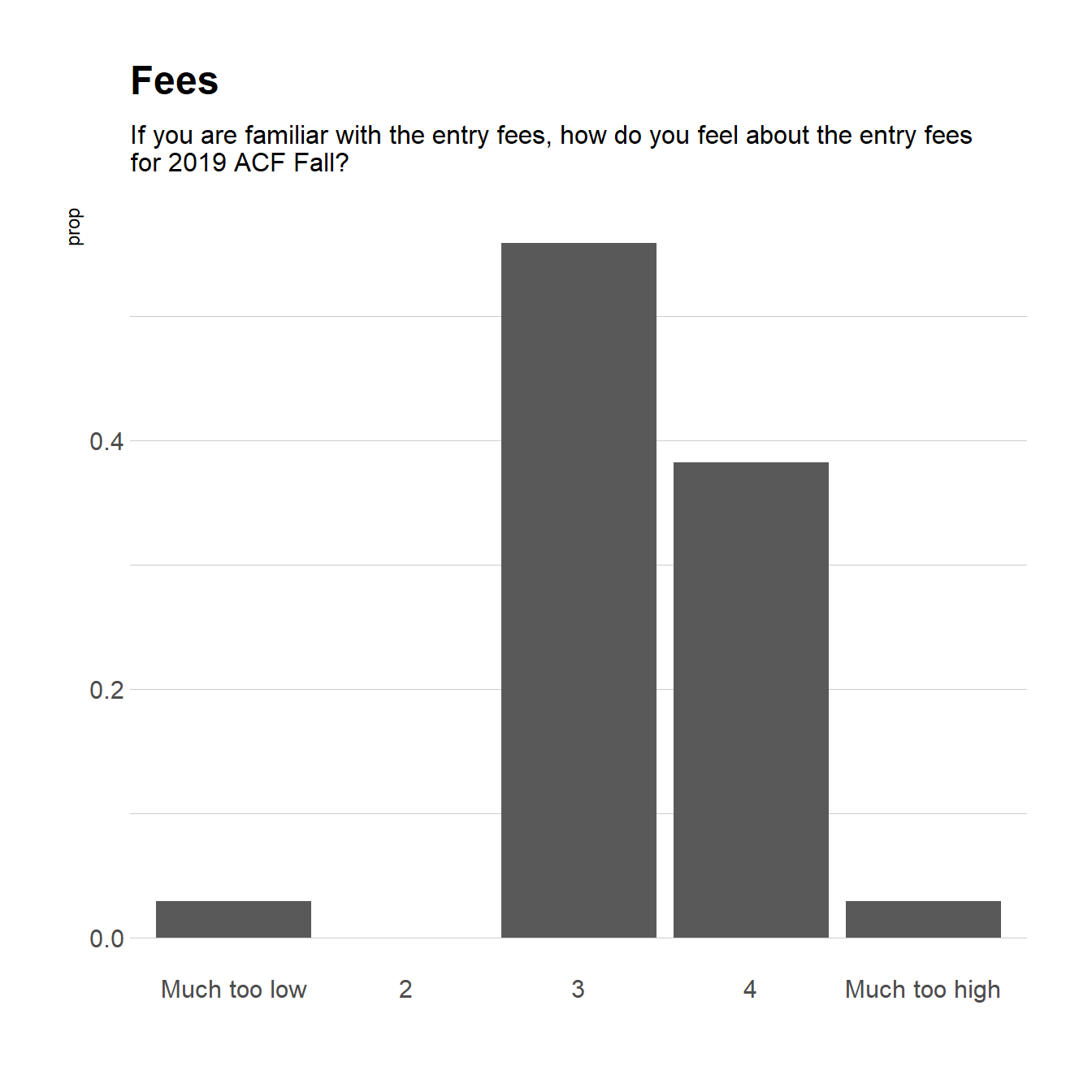 Most respondents said they thought ACF’s fees were neither too high nor too low (n=34). The majority of respondents said their team was able to afford ACF Fall easily, although a non-negligible amount of teams found the cost difficult (n=29). 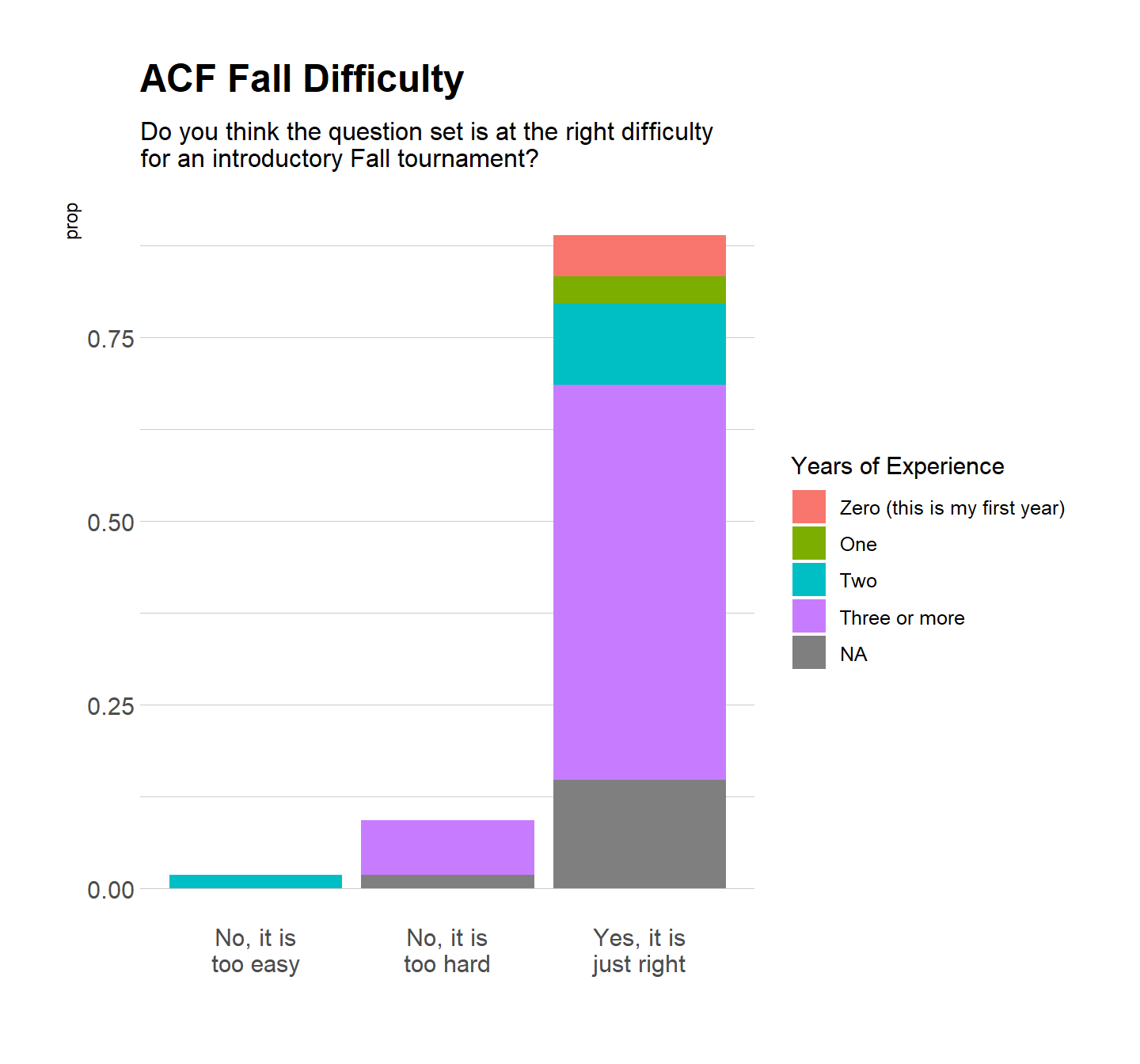 The vast majority of respondents, including newer players, said that the difficulty of ACF Fall was in the right spot (n=54). 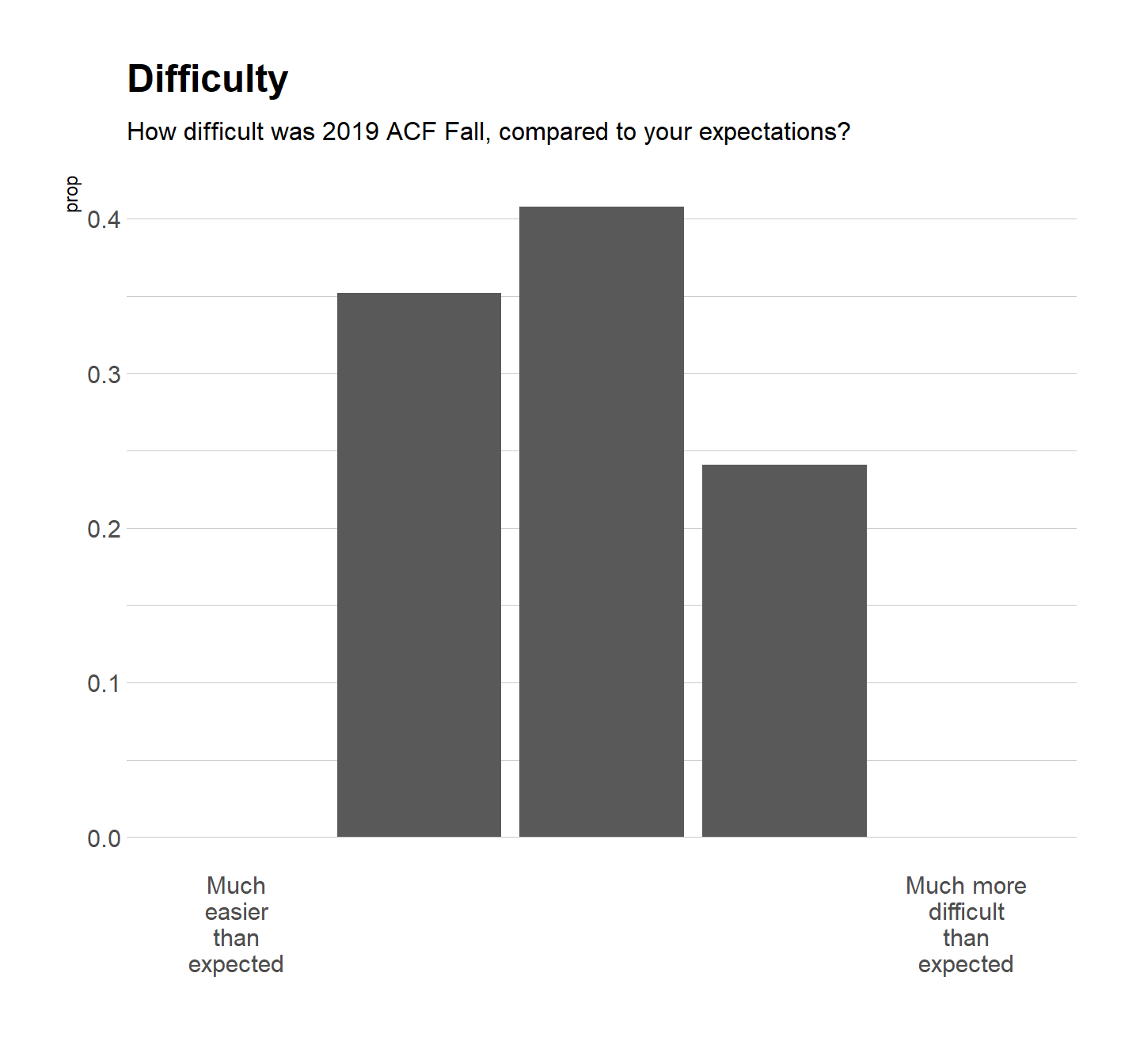 No respondents indicated that the difficulty of ACF Fall was much easier or more difficult than expected (n=54). 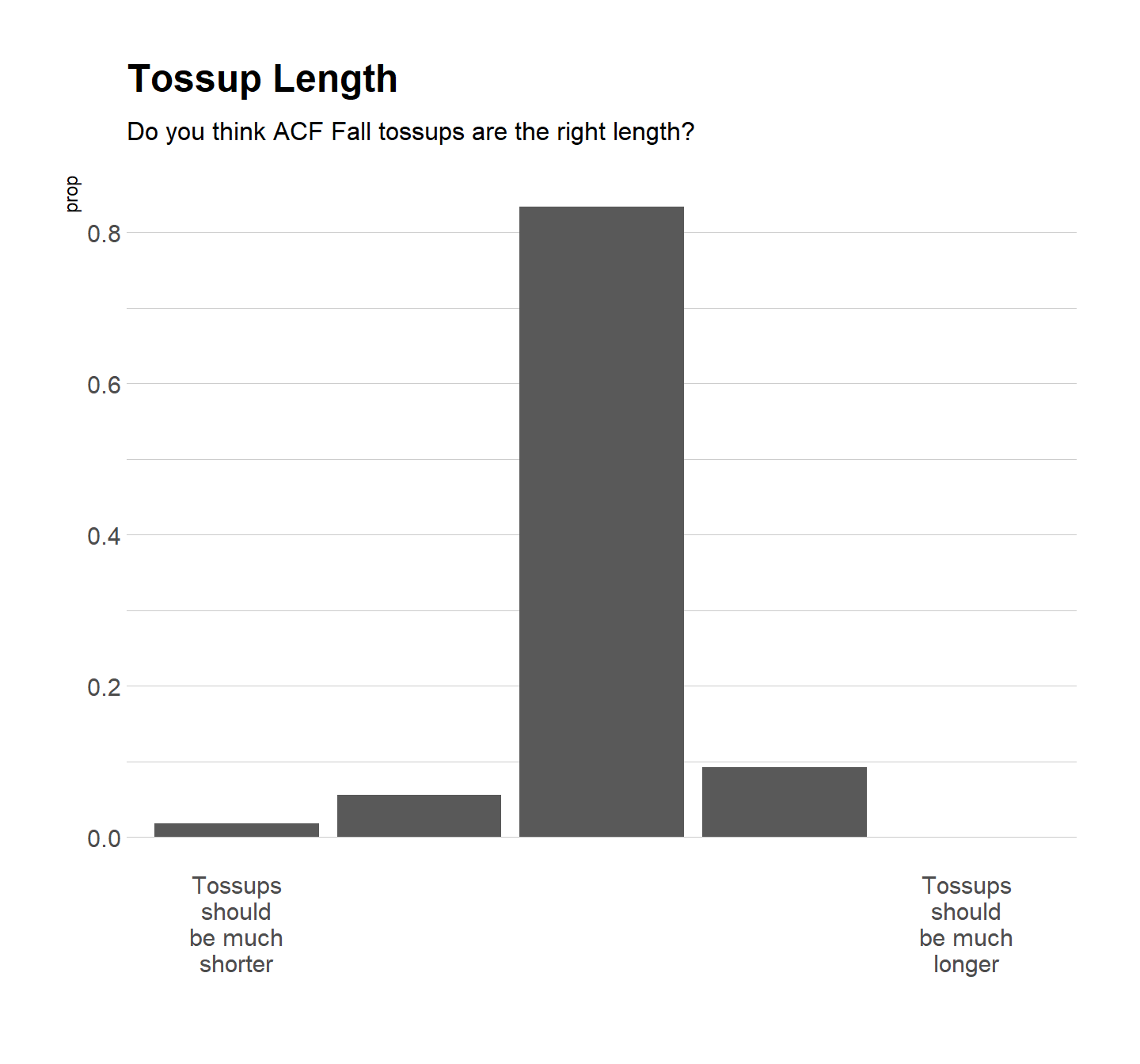 The vast majority of respondents also said that they thought the tossup length was just right (n=54).

Watch this thread! I pushed out these graphs (for what I felt were the most important questions) as quickly as I could given my work demands, because I knew there was a lot of discussion and curiosity around these subjects. It is likely that we will have more to share in the coming days and weeks.
Alex D.
ACF
http://tinyurl.com/qbmisconduct

"You operate at a shorter wavelength and higher frequency than most human beings." —Victor Prieto
Top
Post Reply
1 post • Page 1 of 1